A short 12 minute clip on being whatever you want to be, Without any laws,

I'll let you make up your mind.

https://www.youtube.com/watch?v=TUBDXqBZkqU
“The day science begins to study non-physical phenomena, it will make more progress in one decade than in all the previous centuries of its existence.” - Nikola Tesla

I was a bit disappointed when he said that Mr Trump "identified" as the president.
Clearly, Mr Trump was actually voted in as the President.
But the Trans Anything is going to be a thing.........
I think it's funny.
It saddens me when something that is actually funny is dismantled, analysed, and called out as some nazi or hate speak.

I self-identify as a Sasquatch.

Don't trigger me.
The mightiest oak was once a nut that stood his ground https://www.sasquatchstories.com
Top

LOL
It can only happen in America... or can it ?
What next... imagine how things might be 50 years from now
Top

Think of the hippies, though - they all became yuppies when they grew up and nothing much changed after Woodstock. I think the 'mainstream' members of society will always be more numerous in comparison to the extreme ones.
Top

One of the social media art sites I frequent has identified something that both exasperates and irritates the hell out of me, and it's teens and youths who are/have been 'coming out' as 'transgender',
even though most of them really don't have a clue about the whole picture of genuinely transgendered people, who have a number of identified symptoms/cognitive dissonance that truly define someone
who seems to believe they were 'born into the wrong body'.

These teens/youth have seen so much bandied about in the media and on this self same website about transgender folk, and have simply 'self diagnosed' themselves incredibly erroneously
in order to show some kind of solidarity. They openly admit to not having some of those key defining mindsets,
making it obvious they are only doing this for attention or peer approval.

There is even a name for these kids, and it's so accurate it hurts.

I had to roll my eyes a few weeks ago when some art appeared on my feed from this website, and I actually thought "Now I've seen everything."

Art people, kids mainly, create original characters, or OCs to reflect their views of the world. This one was the reason my eyes rolled so far back into my head, I could almost see myself think. 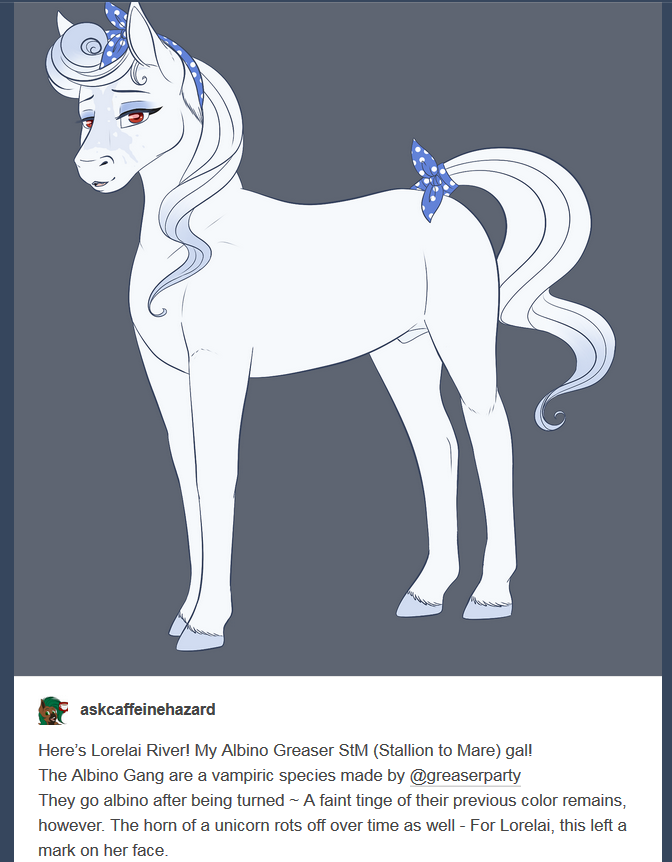 I have zero doubt there are totally genuine transgender folks struggling with their bodies and lives, for whatever reason and cause, so this jumping on the bandwagon leaves me thinking
'Well, this could be good, as it shows acceptance', but it also infuriates me, as it cheapens the horror of true gender dysphoria.

There are people out there who believe that they aren't truly human, and who dress up as the 'spirit' animal they wish they could be, in fur suits. They also have conventions and it's here that another trend was born,
as these kids and adults adopt the mannerisms, habits and appearance of the creatures they imagine themselves to be. They call this their 'fursona' (persona) and some of them are seriously SERIOUSLY
into their belief that imitating an animal and 'being' one as much as they can, will give them peace.
Personally, I think they like the idea of a genuine, warm, basic instincts sort of lifestyle, where human rules and ettiquette don't apply, and where they can just do their own thing without guilt.
I don't find them in any way threatening, or sick in the head, but on occasions, I have read
some alarming things about these Furry parents, raising their kids who think their mum and dad are insane. 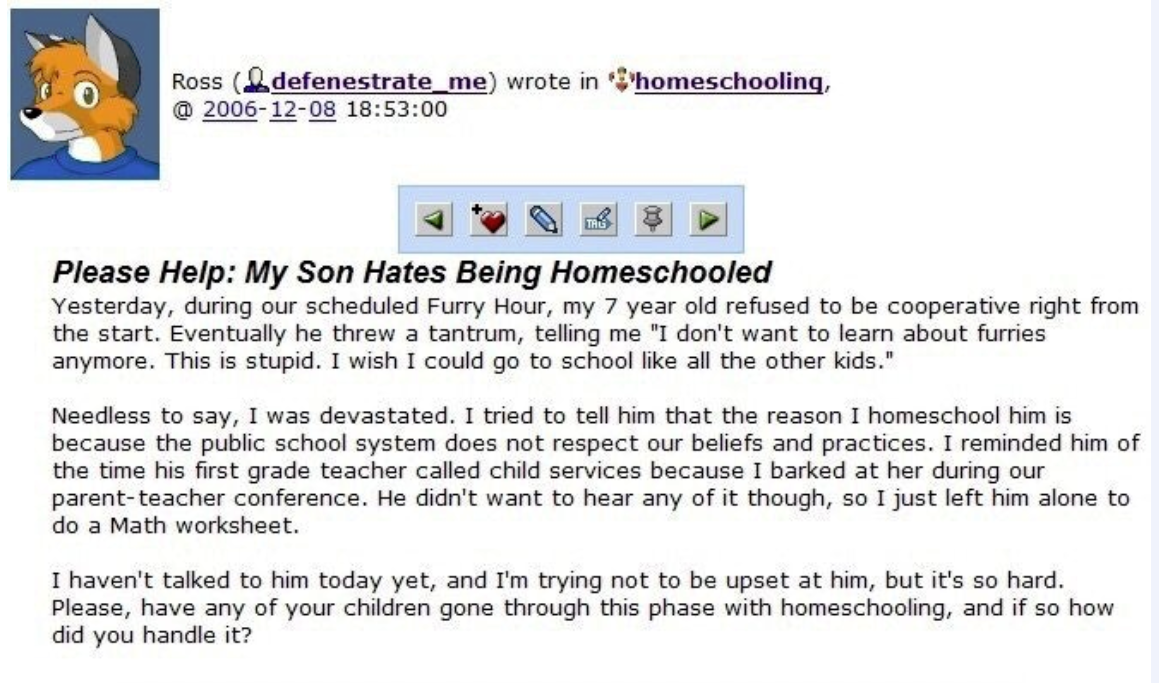 This particular thing isn't new, but there are some people out there who are well... OUT THERE.

My belief is that if it isn't hurting anyone, leave them be what they want, but I really wish the transgender situation wasn't made into an attention seeking thing
for young adults who don't yet understand any better.

Shazz, I agree. I think it has become a sort of 'fashion statement' to some degree. Without a medical diagnosis, it's all ephemeral. As for people's 'fursonas' I honestly think this is some form of psychiatric disorder. In bygone eras people like this were seen as werewolves or shamans or witches, etc (depending on the culture they were born into). I think the 'furry' thing is an expression of this; again, these people do not (and never will) reflect the majority, but I do think their behaviour is potentially very harmful to impressionable children. Barking at people is not normal behaviour, obviously.

It's a sort of modern insanity that every form of behaviour is somehow acceptable nowadays and finding it unacceptable (and saying so) makes you into some sort of villain or oppressor. I first saw the 'furry' fetish on an episode of CSI years ago and though it had been made up for the show. About a year later I saw it mentioned on a message board in a thread discussing superhero conventions and 'cosplay' (or 'fancy dress' to us oldies), and realised this was an actual thing that people were doing and it wasn't fictional (well...'not fictional' in the sense that real people were involved in it...you know what I mean).

I'm amazed at how quickly the whole 'I'm okay you're okay' mode of thought seems to have ballooned into some sort of societal Trojan Horse; if you say you disapprove of anything short of murder, you're somehow 'part of the problem', etc.

There are even sympathisers/apologists for these subcultures. It's problematic. We're supposed to accommodate the 'needs' of a small group whose behaviour may well be a sign of mental illness, but anyone who expresses genuine concern about this fact is 'shamed' and told they're being cruel, etc.

I'm not sure how it will end. Perhaps, like the hippies or metalheads or punks or skinheads or sharpies or mods before them, the furries will simply grow out of it and fade into obscurity?
Top

Well said Shazzior.
It is for these reasons Russia has a very strong attitude towards ANYONE trying to promote their sexuality on children.
The mightiest oak was once a nut that stood his ground https://www.sasquatchstories.com
Top

As to the transgender stuff; it's a serious medical condition, and is recognised as such. I doubt most of the kids who are describing themselves as 'gender fluid' understand the inherently narcissistic nature of their own behaviour. Hopefully, they will grow up a bit, have a think about it and just give over.

The thing about pronouns gives me a headache as well . If people are going to be that touchy, I can always substitute 'they' or 'them' or 'theirs' for his/her ones. If there's any justice, the people demanding that this be done will be deeply embarrassed about having done so once they're 25 years old with a mortgage and bills to pay.

Return to “Off Topic”