This board is open for all matters and discussions pertaining to the Australian Yowie. Please keep on topic in this forum.
Post Reply
First unread post • 8 posts • Page 1 of 1

New member here - absolutely fascinated with the work you are undertaking. Unfortunately I am Melbourne based and sightings are ultra-rare down here!

Seen some recent footage from 'Bigfoot The Australian Yowie “Cryptozoologist”' however I am somewhat skeptical as he does receive income as 'donations' from his videos tarnishing his brand.

I will attach below and am keen for everyone's thoughts?! Brand new to the game so let me know if I've misread anything! 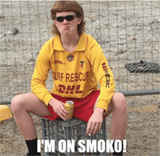 Hi Cookie. That guy is a 100% hoaxer. But do not be put off, there is much better stuff to dig into and you're in the right place here. I'm also a Melbournian but trust me there's places in Victoria with activity. I can confirm the Alpine ranges are a region worth checking out for many reasons. Cheers.
The more you've found, the less you've been around.
Top

Thank you! Thought so, seemed wayyy to good to be true.
Top

It's not even a good Hoax, it's his worst attempt so far. Sorry I'm wrong, I forgot the Yowie Claw video that had the glove strap hanging down. So it's 2nd worst attempt.
If there's no Squatch, I don't watch.
Top

I know he is a hoaxer and has "cried wolf" many times and he seems to be just after the dollars and as Yowiedan said the Yowie claw video was the worst of the lot. But that does not mean he cant ever gain some interesting footage or audio, does it?

I actually think he may have caught something looking at the video and the original footage, what that something is I do not know, its certainly a moving object whatever that may be? a few of the comments in the video suggest that its dragging a stick to me it actually looks like it could be trying to usher a little one along.

The guy deserves downright criticism for crying wolf and hoaxing, I am all for that, but the above footage itself should be scrutinised with an open mind IMO.

He may have caught something? but because of his history we dismiss it as a hoax, is that right or wrong?

I guess its up the individual to decide.
“The day science begins to study non-physical phenomena, it will make more progress in one decade than in all the previous centuries of its existence.” - Nikola Tesla

Is that Jason heal your talking about? He use to team up with Jason Dunn called J&J yowie research. I remember that so called Yowie video,looked nothing like a yowie..

Dion wrote: ↑
Fri Aug 12, 2022 3:23 pm
I know he is a hoaxer and has "cried wolf" many times and he seems to be just after the dollars and as Yowiedan said the Yowie claw video was the worst of the lot. But that does not mean he cant ever gain some interesting footage or audio, does it?

I agree, I've said before that he gets around a lot and goes to interesting places. Maybe he's a budding Todd Standing who is a bit shifty but also goes out and gets amongst it. Big picture though, they are still hoaxers so buyer beware.
The more you've found, the less you've been around.
Top

Plenty of Hoaxers out there, not sure why they bother, we have quite a few here in Australiap
PC BY NAME
Top
Post Reply
8 posts • Page 1 of 1