I only ever recorded them at the feeding site vocalising twice .
If you go here and in the miscellaneous section at the bottom of the page there are 2 pieces which I believe is him . https://www.farsouthcoasthominoideviden ... audio.html
The files are called , 1st ever recording and 2nd ever recording .
I've heard a similar vocalisation to the first recording once , live on one occasion within about 12 metres , he/she was waiting for his/her tucker .

Wow , you luck thing , I've heard mumbling a couple of times but never recorded it .
I've never heard anything speak , or words of any description but I've recorded what I believe to be speech with the 24/7 setup . On the same page as above in the Evidence of speech section . 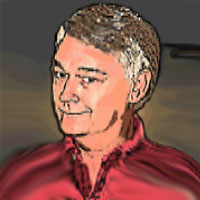 Thanks, I hope you'll not be offended by my following query (so apologies in advance).

Did you ever have anything strange happen to you while in their midst/area (IE weird, discombobulated and/or any of the following: feelings/emotions or perhaps the lack of motor skills,etc.)?

Not necessarily the "Woo-Woo" stuff... more like Hmmm that's odd, different and strange.
Johnny
While looking for the jigsaw pieces missing from the box, always remember... No Matter Where You Go, There You Are!
Top

When feeding the group , only once did I ever get the feeling that something wasn't quite right but I may have been mistaken .
So what would happened was I'd get out of the car and one of them would start stomping on the ground from what seemed to be around 30 metres/yards away , out of view , heavy thuds , like , I'm here , where's the food ? This was regular stuff .

It was around the 2nd or 3rd month into feeding . I hopped out of the car , waited for their stomping signal , I heard it but something didn't add up , it SEEMED to be a lot closer this time . So I'm looking for the creature which I expected to be in viewing range but it wasn't .

I do have an explanation which is plausible but I also could be wrong .
Either the regular stomping was twice the velocity and twice the distance I assumed it was and when it came closer I assumed it would be in view OR it was stomping within view but was invisible .

I've seen some very strange things in the forest a long way away from this group and I'm aware of the reports , I do not dismiss those reports . But , I've learnt the hard way not to say anything that I can't prove . If I had seen movement on the ground or bushes moving I'd be more than happy to mention it but I didn't . So realistically I can't say exactly what happened .
Top

Rusty2 wrote: ↑
Sun Dec 08, 2019 4:30 pm
I've seen some very strange things in the forest a long way away from this group and I'm aware of the reports , I do not dismiss those reports . But , I've learnt the hard way not to say anything that I can't prove . If I had seen movement on the ground or bushes moving I'd be more than happy to mention it but I didn't . So realistically I can't say exactly what happened .

I've been keeping up with the reports that had a 'fringe element' to them and although I have a hard time with trying to make heads or tails out of the phenomena with some form of science and logical deducing... regardless of it all, I can't deny that it does happen and so I have to put it in my "HUH?.. that's Strange File Cabinet.

That unfamiliar 'form of reality' got thrown in my face big time on my Samuari Chattering event (hence my asking if you'd had anything happen).

I had cameras and recording gear with a foot or so arms reach and I didn't lean over and grab anything to capture them with. It gets even stranger. I couldn't really do much of anything but sit in the cab of my 4wd and remained there until my partner returned back to me (He'd gone into town and I was there on the Mountain by myself). Rather than go through the whole thing I posted it up on a different thread here (if anyone is interested) http://www.yowiehunters.net/viewtopic.p ... 152#p56152

I didn't go up and investigate, didn't grab my cameras just in case there was a visual display... I did nothing at all, it was like I was there.. but just numb (best I can describe the feeling or lack of feeling). That has never happened in any of the many other genre investigations I've participated in.

So again, I do appreciate hearing other researchers/Investigators share there event(s), makes me feel not so crazy. If anything it's made me seek out more Bipedal reports that border on the fringe.

Johnny
While looking for the jigsaw pieces missing from the box, always remember... No Matter Where You Go, There You Are!
Top

I can't really say that anything like that has happened to me but I can assure you that your probably not crazy . I notice things , or I'm very observant and I've seen some very odd things , not just in the forest . There's strange things happening all around us , I just wish I had the time to study it all but life's too short .