This board is open for discussion on the Australian Yowie, Bigfoot, Yeti & Sasquatch. Please keep on topic in this forum.
Post Reply
First unread post • 15 posts • Page 1 of 1

About 2/3rds of the way down it talks about a skull found in Kow swamp just over 100 years ago, called the Pintubi skull, or precisely, 'Pintubi-1'.

The skull appears to be very similar to Homo Erectus yet H Erectus was supposed to have disappeared many milenia ago???

"An anthropological paradox
The controversial Pintubi-1 skull of Australia (pictured below) is a paradox of paleoanthropology. As a hominid fossil, its so young that it has been assigned to a tribe that survived into the last century. A modern aboriginal skull. Yet its morphology could be described as archaic. The skulls history is shrouded in mystery (not unlike others from the down under). Even without documentation, its age and Australoid identity are indisputable. The man it inhabited lived An anthropologic paradox very recently (in paleo-terms), likely in the 1800s or later. It is in perfect condition and shows no signs of antiquity. The skull was discovered or obtained around 1905 near the lower Darling River in New South Wales, Australia. Beyond that, all we are able to determine is that it is said to be a large adult 50 year old male from the Pintubi tribe."

pintubi_angl_t.png
"Scientific speculation of Australian aboriginal ancestry has lately gotten bogged down with the Out of Africa vs. Multiregional Evolution debate. Almost universally accepted is the Out of Africa theory which states that fully modern man emerged out of Africa only 100,000 years ago, spreading across the globe and wiping out the (obsolete) archaic humans. Out of Africa insists that early human species such as Homo erectus and Neanderthal became extinct - evolutionary dead ends - and had nothing to do with the development of Homo sapiens. That we are, therefore, all descended from this recent wave of African humanity.

Much of the evidence for tracing them back to South East Asia and all the way back to the extinct Indonesian archaics has been the cache of recent fossils in Australias Kow Swamp locale. They were initially described as very reminiscent of Javan Homo erectus. But a strong case was made of the likelihood that artificial deformation was responsible for their seemingly robust and primitive appearance. Even though many of the specimens did NOT show signs of deformation, they all became tainted with the label and were relegated to an area of relative unimportance. The fact that these Kow Swamp bones were estimated to be only 20-30,000 years old added to their seeming incongruity, the vintage being much too young.

The subject skull, modern in age, yet archaic in structure is a relevant example and deserves the following brief description.

Even if a pathological oddity it would demand attention but an anthropologist at the University of Michigan assures us that this is not the case and that this specimen isn't that unusual.
The present proprietor of Pintubi-1 (Canovan Researchs designation) for study is not known. An excellent cast was supplied by Bone Clones Inc. (http://www.boneclones.com/) for this description.

Description: Excepting its missing teeth, the skull is complete and quite robust. Quite long and somewhat low, its general measurements include a total length of 8 ¼, by 5 ¼ in width, and a height of 8 ¼. The moderately low vault has a marked frontal slope with a well developed saggital keel along the midline."

There is the classic 'cone-shaped-head' found in a lot of descriptions of eyewitnesses....


"Despite the dramatic contours, there is no hint of artificial cranial deformation. Although cranial capacity remains unmeasured, the vault appearance doesnt indicate anything of obvious note with the possible exception that it appears large. A nearly unbroken but fairly well developed supraorbital torus is very evident. Its development and prominence is complete over the nasal area (medially) but has a more gracile lateral portion. Also notable is the distinct nuchal torus (occipital bun) at the rear area of neck muscle attachment."

And here you have the massive neck muscles which give them their 'no-neck' appearance...

"Measured horizontally, it is a good 3 ½ and very pronounced with much expansion at the center. Above the torus is a well defined groove. There is some thickening and angulation at the temporal lines. The pentagonal shape of the vault from the rear is quite remarkable. This same view does not show an obvious maximum vault width at the top or at the bottom but callipers give a slight edge to the bottom (5 vs. 4 ¾).
Top view indicates a well defined post orbital constriction (calipers indicate 3 5/8 front vs. 4 ¾back).
Orbits are quite square and nasals are recessed at base as in typical australoid morphology. The zygomatic flare is very wide and pronounced. And the nasal aperture is notably broad.
The face is large, wide and forward projecting (prognathic) with very large maxilla. ... Mental eminence (chin) is moderately weak with minimal forward projection."

Looking at this skull I can easily imagine it covered with flesh, with deep-set nocturnal eyes and an immense neck... in short exactly like so many descriptions by witnesses.

Is this in reality a Yowie/Sasquatch/Bigfoot/Homo Nocturnus skull?
bindaeuro1.jpg
bindaeuro2.jpg
You do not have the required permissions to view the files attached to this post.
The mightiest oak was once a nut that stood his ground https://www.sasquatchstories.com
Top

Yes, I also suspect it's a Yowie skull. It doesn't look like a modern skull at all to me. The fact that it exists should indicate to mainstream science that something is up...but they'll just change the dates surrounding when certain species became extinct in Australia, etc, and explain it in that manner.

Well spotted, Wolf. I'd forgotten about that skull although it's been written about extensively in the past. There's so much stuff that's hidden or 'buried' by the avalanche of online info these days.

'Mungo Man' is another interesting example of an unusual fossil find, but is also fobbed off in the same manner as simply being 'unusual'.

Its an interesting find. We could be looking at a yowie skull there. Just imagine how many of these artifacts have been found during mining excavation and housing development.

I doubt Mr Developer and our wonderful Mining company's are going to hold up proceedings for a burial ground or skeketon when theres money to be made.

We used to hear tales of this is Brisbane all the time during the Joh era and doubt its any different now.
Yowie Bait
Top

Yep, and not everyone would report it even if they thought it was a human skull for fear of 'getting involved' in something criminal or potentially dangerous. There's a certain amount of wisdom in that now I think about it, but you do wonder how often stuff like this has surfaced only to be hidden up the bureaucratic sleeve of some local official who stands to profit from nobody knowing about it, etc.

As you say, they're not going to let anything stand in the way of their profit margin.

I think Wolf is spot-on and that's a Yowie skull. 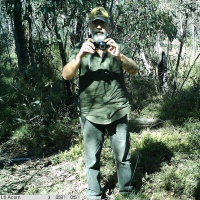 Homo erectus pekinensis (formerly known by the junior synonym Sinanthropus pekinensis), is an example of Homo erectus.
Discovered in 1923–27 during excavations at Zhoukoudian (Chou K'ou-tien) near Beijing (written "Peking" before the adoption
of the Pinyin romanization system), China, in 2009 this group of fossil specimens dated from roughly 750,000 years ago, and a
new 26Al/10Be dating suggests they are in the range of 680,000–780,000 years old.
You do not have the required permissions to view the files attached to this post.
Top

Here's my pick or as close to it as I can find, based on the shape of the head that I witnessed.

Nutcracker Man Australopithecus boisei
You do not have the required permissions to view the files attached to this post.
Top

These used to be classified as Zinjanthropus. I thought I'd add an artist's impression as this particular image seems to fit (broadly) with what many eyewitnesses describe.

It's likely they're not precisely like this - many people describe a more human-style nose and greater height - but the description below certainly fits many of the descriptions in the AYR audio reports.

Thanks heaps for the link Wolf, it's all starting to add up. That skull has larger eye sockets, a small crest but basically round skull and a massive jaw with plenty of room for huge jaw muscles, pitty it's missing some of its teeth, nice work, again great link.
Top

Wow thanks for sharing Wolf, you had me at the eye sockets ! +1 on Yowie skull, what happened to the rest of skeleton?
A whole skeleton would be holy grail of our research, that or one that's died of natural causes

Just some more detailed info regarding these finds.
Top

Pintupi-1 Skull.pdf
You do not have the required permissions to view the files attached to this post.
The Wild Man in Myth and Flesh: An Introduction To Relict Hominids...

Again though, I'd prefer to see the example for the modern human be less overtly Nordic/Northern European/Caucasian, and more generically Eurasian or similar. Would be a much more useful comparison. In reality, only a very small percentage of modern humans look like that last skull!
Top